The Doctor and the Bridge

By Jess Read, MD as told to his son. 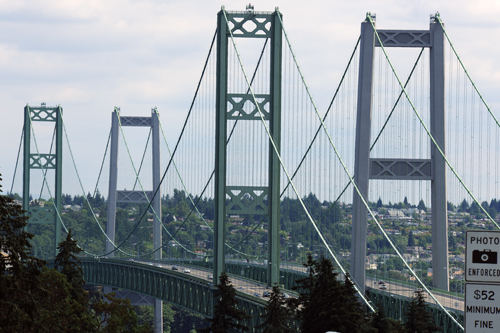 How is a prominent Tacoma, Washington Physician and Surgeon connected with the original Tacoma Narrows Bridge?

What part did Dr. Jess Read play in the history of the 1940 Narrows Bridge?

(November 9th, 2015) - Seventy-five years ago today, November 9th, 1940, residents of Tacoma, Washington turned on the local radio news on KMO and KVI and learned that the Tacoma Narrows Bridge had collapsed into the cold and wind driven water below.

It was reported at the time, and years later in various stories about the construction problems with the bridge, that my father, Dr. Jess W. Read, was the last person in a car to cross the bridge.

What has not been reported in the history books is why my father was crossing the Narrows Bridge that morning, or that he took most of the pictures that have been published through the years of the bridge collapsing, and how it happened that dad had cameras with him that morning.

To understand the fascinating story, you need to know a little about Jess Read.  He was a Stanford medical graduate as was his father before him, Wilmot D. Read, M.D.  Growing up, Jess loved and studied photography.  I have always referred to dad as an "amateur-professional photographer".  Obviously an amateur because his profession was medicine.  But he was truly a professional photographer.

Serving on General George Patton's medical staff, dad was cleared to take pictures during the war.  I remember him showing me home movies which were actually documentaries.  Dad had a complete film developing lab in the basement of our home in Tacoma.

It was well known by 1938 that Tacoma was promoting the idea of a bridge to connect Tacoma with the Gig Harbor area.  What better subject for one of Dr. Read's film documentaries than the construction of a 2800 foot bridge that would be the third longest span, at the time, in the world.

From the very beginning, dad told me, he starting filming the building of the bridge.  Some of the contractors were taking still pictures as the construction went along, but dad was the only known photographer filming a documentary on the building of the Tacoma Narrows Bridge.

Dad was out at the bridge construction site so often, he became known to the contractors, workers, and later, employees.

The bridge was dedicated on July 1, 1940 with a speech by then Washington Governor Clarence Martin, which of course was carried on KMO and I think also on KVI, Tacoma's two radio stations at the time.

Dad became aware almost immediately of the left to right rolling sensation of the bridge while driving across from Tacoma to Bremerton and back, taking motion pictures on every trip, while mother or other friends did the driving.

Heavy bags were attached to each side of the bridge in an effort to stabilize the motion of the roadway.  The two lanes were very narrow because the bridge itself was narrow.  Dad indicated it was almost a tight fit when cars passed each other going in opposite directions.  So on windy days when the roadway way rolling, it was a little unsettling. All of this dad caught on movie film.

Because of this motion of the cement roadway, especially on windy November days, people starting referring to the Tacoma Narrows Bridge as "Galloping Gertie".

Seventy-five years ago on a windy, chilly morning of November 7th, 1940; the movement of the bridge was worse than ever.  Winds reached gusts of 40 plus miles per hour.   Dad was making his early morning rounds at the hospital and was planning on going out to the bridge to take more pictures after lunch.  So he had his cameras in his car.  He received a phone call at the hospital, according to my mother, from a friend who worked in the toll booth on the Tacoma side of the bridge.   He told dad that there was really violent movement in the bridge both left to right but now he could see the roadway moving up and down.   He told dad he should get out to the bridge right away.

Having just finished seeing his last patient, dad corralled someone at the hospital to come with him and drive his car to the Narrows Bridge.  From the Tacoma toll booth, it appeared that the bridge had settled down a bit so dad's car was allowed to go across the bridge.  But within seconds the wind was stronger than ever and the toll booth closed the bridge on both ends.

That is important because no one, no car was allowed to go onto the bridge after dad's car.  About that time, photographers and reporters started to arrive at the Tacoma side but were not allowed to walk or drive over the bridge.

Dr. Jess W. Read was the ONLY person who was driving across the bridge taking pictures from the passenger side of the front seat.  Dad told me he held the movie camera totally still and you can see in the pictures that the cement roadway of the bridge rose so high as to totally obscure your vision.  All you could see out the window of the car and in his motion pictures, was cement in front of you.  That was a frightening sight.  I asked dad if he felt the bridge was about to collapse and he said yes that because the roadway was now not only moving from left to right but also up and down.  It became obvious that the structure could not stand an up and down motion and a cross motion at the same time.

God was with dad as he finally got the car to the end of the bridge on the Bremerton side.  He immediately stopped safely, and turned around and started taking pictures of the bridge looking back toward Tacoma.  I made a point of asking him if there were any other photographers on that side of the bridge and he said that he was the only one.

The pictures show that the first section to raise in the air, split open, and plummet to the icy water below, was closer to the Bremerton side then the Tacoma side of the bridge and that is why dad got such a great picture of that section collapsing.

You have seen, I am sure, many of dad's pictures taken that fateful day.  However, assumptions have been made through the years that pictures of the first section to go down were taken by a newspaper and private photographer.   But that generally was not the case.   Remember that no one was allowed on the bridge after dad's car and press cameras in 1940 did not have zoom lens as we have today.  They were big 4x5 sheet film cameras like you see in old movies.  Those cameras were simply not able to "zoom" in for a close up of the section of the bridge closer to Bremerton.

Dad's position on the Bremerton side of the bridge, is what made those pictures possible.

What happened to dad's pictures, movies and stills, and his documentary on the bridge from day one?   Not being a reporter or in the commercial photography business, dad told me he donated his pictures so that they could be used by historians.  From what I can tell, somewhere along the way, the original group to which dad donated his films, sold or made them available to others as they have shown up through the years with no photographic credit to Dr. Jess Read and in fact I have seen some credited to all sorts of firms, individuals, and organizations.  Dad was obviously not looking for fame or publicity by virtue of his Narrows Bridge pictures or his first hand experience as the last car to go across the bridge.   However, others did so.   Dad was too professional and too busy in the medical profession.

Dad and his friend from the hospital had to drive home the long way through Olympia to get back to Tacoma.  I think the toll booth friend of dads, who phoned him at the hospital, told reporters that Dr. Read was the last car to safely make it across the first Tacoma Narrows Bridge.   So by the time dad got back to Tacoma, KMO and KVI were calling wanting dad to come on the air and share his first hand report.

KMO in 1940 I think was affiliated with the Mutual Broadcasting System radio network and as I recall, dad said he was on the coast to coast Mutual network from the KMO studios in downtown Tacoma, nation wide.  KVI was the CBS Radio Network affiliate for Tacoma and later that evening dad was also coast to coast on CBS from the Rust Building studios of KVI.

Now you know "the rest of the story".   How a well known Tacoma MD knew so much about and was part of the history of the first Tacoma Narrows Bridge.

An interesting PS to the story is the fact that Hallett French, an insurance agent from Seattle, served time in the Washington State Penitentiary in Walla Walla.  French was convicted of grand larceny as he deposited $8000.00 in premium funds for insurance on the bridge, in his personal bank account without paying the premium to his firm.

Can you imagine the shock that Hallett French must have felt as he very possibly heard Dr. Jess Read on the local Mutual and CBS radio affiliates talk about the collapse of the Narrows Bridge on a local Idaho radio station where he was vacationing?